For Use with the AxiDraw and Other Pen Plotters 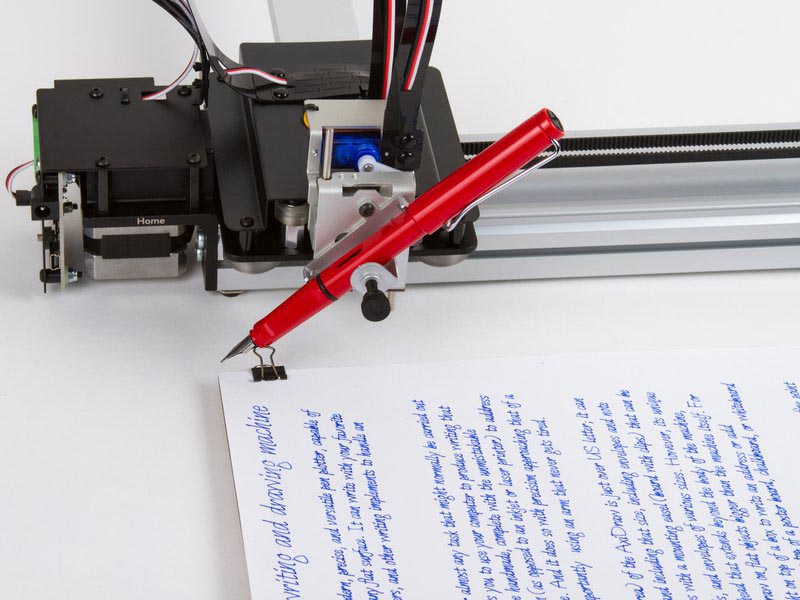 For those people looking for the next level of handwriting font realism there are pen plotters. These machines, for example the AxiDraw (pictured), use real pens to mechanically create handwriting from computerised text. This adds additional realism through changes in ink density and the fact that the handwriting is actually written rather than printed. Unfortunately, standard TrueType fonts are unsuitable for such equipment. This is because standard TrueType fonts describe an outline for each character in the font, rather than an actual pen stroke, as per the example below.

As you can see in the example above, a standard TrueType font is a 'closed contour' font and this always produces an outline when sent to a pen plotter or other CNC machine. Every line has to describe a shape and no line can be open ended.

However, there is a way to convert standard TrueType fonts into 'open contour' (also known as single line or single stroke) fonts so that the pen only makes a single stroke per line, rather than an outline. The example below is the same font that has been converted to a single line font and written using a pen plotter.

This produces the most realistic handwriting effect, with changes in ink density and other ways that pen ink interacts with the paper.

Use the Axidraw Pen Plotter with our single line fonts

With the combination of our single line Premium 'Ultra' handwriting fonts, the Scriptalizer™ software and a compatible pen plotter such as the AxiDraw, you can now create realistic handwritten documents that were never actually written by a human hand!

Will these fonts work with other plotters?

If in doubt you can check with the manufacturer, or try our Single Line SVG Font Test Document to check for compatibility with your equipment. Please also see our list of resources.

Software download, resources and other help
(Opens in a new tab)

How to Purchase Single Line Fonts